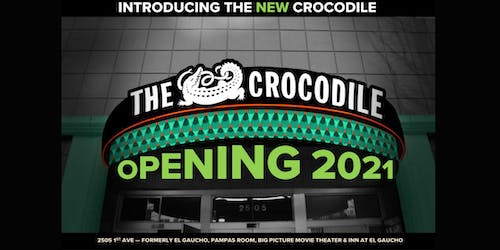 (Sigh) Okay, woof, what a relief just to say it. It’s heartfelt and heavy and we don’t know what exactly to do with our hands, but we really wanted to tell you. And you and you and even you.

Let us jump back because the history of The Crocodile is literally littered with experiments and surprises, grunge and hopeful guessing. The Crocodile Café opened in 1991 in what was a greek restaurant; one of the few places with vegetarian fare in the neighborhood and a test site for rock shows in the 80s. Our opening night christening was with The Posies and Love Battery. After that, it all happened really fast. Local bands frequented the stage and some of those bands became national bands. Some of those national bands became the biggest bands in the world. Nirvana opened for Mudhoney under the pseudonym Pen Cap Chew in 1992. Surprise! Pearl Jam appeared as the unbilled opener for Cheap Trick in 1998. Surprise! Beastie Boys played a secret show in 2007. Surprise! The Crocodile closed suddenly in 2007 as well. Surprise! 

Yes, it’s true. We’ve done this before. In 2008, Marcus Charles (once coowner of Neumos, cofounder of Capitol Hill Block Party) took a look at Seattle’s cultural landscape—that we’d lost the SuperSonics and a number of established bars, restaurants and venues—and felt that, despite an economic recession, the city was going to need live music, arts, food and plenty of drinks to continue to thrive. He gathered a number of investors including Susan Silver (venerable Seattle manager for Soundgarden, Alice in Chains), Sean Kinney (drummer of Alice in Chains), Eric Howk (guitarist in Portugal. The Man) and others to save The Croc. They renovated the venue entirely; down to the studs, digging out and replacing pipes, the works. In 2009, The Crocodile reopened.

And we’ve thrived! In 2019, The Croc broke attendance records for the sixth consecutive year. Rolling Stone even named The Crocodile in their top ten list of best concert venues in the country. Surprise! I mean listen to some of the performers we’ve been fortunate to host: Tom Morello and Soundgarden nearly reunite our opening night, Brandi Carlile, Alt-J, Lizzo, Billie Eilish, Snoop Dogg, Social Distortion, Alabama Shakes, Imagine Dragons, Macklemore, G-Eazy, Death Cab for Cutie, The Lumineers, Allen Stone, Kehlani, Mudhoney, Alice in Chains and so many more. To list them now is crazy, but to share that intimate, starforming moment with true and dedicated fans...if you were there, it was something special.

As you likely know, The Croc closed its doors on March 15, 2020 in response to the COVID-19 pandemic. The venue’s management had spent years seeking a long term solution to remain at the historic site by either purchasing the building or continuing to lease. In absence of either option, we embraced both the inevitable reality and incredible new opportunity to grow and evolve. Let me quote Marcus:

“Venues all over the country, including The Croc, are struggling to survive and being forced to make tough choices. We paid rent on time for over a decade and into COVID and, despite it all, an amazing opportunity came our way. Now we have time to build a world-class venue that expands on our tradition of being Seattle’s favorite place to see a show.”

Our new home will keep business in Belltown. The three story structure at 1st & Wall was built in 1954 as a lodge for The Sailors’ Union of the Pacific. Its history includes time as Trade Winds Palm Room Nightclub and Piano Bar (in the 60s and 70s), an event hall billed under its original S.U.P moniker (where local promoters in the mid-90s hosted Radiohead, Bikini Kill, Built to Spill, Korn and others). Then in 1996, the El Gaucho Restaurant Group converted the music venue into their fine dining establishment (now a few blocks away at the Union Stables). After their move, the building’s owners, the Cowen family, showed their commitment to Belltown’s community and focus on maintaining a longstanding local tenant.

And here we are! FINALLY SOME (MORE) GOOD NEWS. The “new” Crocodile will feature a 750 capacity showroom, 300 capacity small club, 96 seat comedy club / movie theater, art gallery, streetside bar & grill and 18 room hotel (with help from Jena Thornton of Magnetic/ERV). All of these spaces will be supported by the existing full-service kitchen and bars. Croc pizza, anyone?

We can’t tell you everything just yet, but we are partnering with a nonprofit to further our mission of being a forum for ideas and expression. The nonprofit will focus on the vitality, inclusivity and diversity of our music and arts community. That means training future music professionals, creating more artistic platforms for local performers and grant funding for a rotating art gallery.

Also, importantly, we must thank all of our current investors who have been fighting to keep The Crocodile in motion and the Cowen family who have already proven to be committed landlords by offering reasonable rent and upgrading the restaurant infrasture (they’re installing a frickin’ sprinkler system!). We wouldn’t be able to make this happen without their partnership. Thanks to all of the people who’ve ever attended a concert at The Crocodile and to all of those who will celebrate with us in 2021. Please tag us on social media and tell us about a favorite Croc moment. We’d love to hear from ya. We miss you.

Oh and one last burning question as I’m sure you’re curious. Is The Crocodile’s iconic sign coming with us? To quote our General Manager, Adam Wakeling, “Oh hell yes! And we’re going to get it restored and lit up again.”